The Big Four Depot opened in 1900 and served as division headquarters for the Cleveland, Chicago, Cincinnati, and St. Louis Railroad. Peak passenger usage occurred during and after World War I, when approximately 32 trains per day stopped there. It was also a whistle stop for presidential candidates, including Al Smith (1928), Franklin Roosevelt (1932), Dwight Eisenhower (1952), and Richard Nixon (1952). The depot officially closed its doors in 1969 and was listed on the National Register of Historic Places in 1975.

After several owners, the City of Galion acquired the property in 2000 with help from the Freese Foundation. Some restoration work on the building was started but never finished. In 2015, the city worked with a consultant to energize a new restoration effort.

For those walking the depot grounds, a self-guided tour is set up: 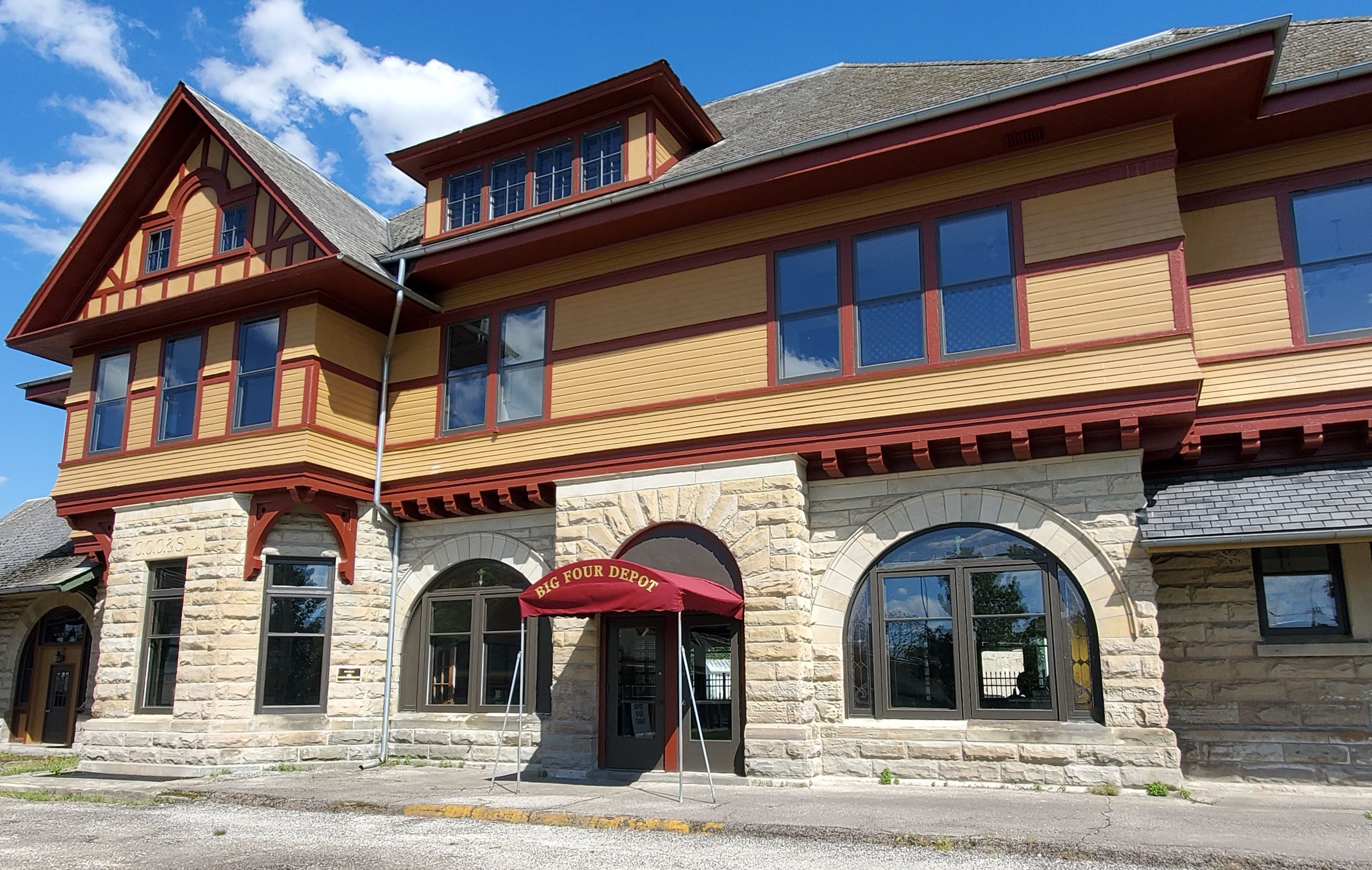 In 2017, the City of Galion received a Certified Local Government Grant from the Ohio Historic Preservation Office to create a Master Plan to rehabilitate the building. The historic architecture firm Chambers, Murphy and Burge, based in Akron, was hired to draft the Master Plan. The firm conducted a physical assessment of the current conditions, developed a re-use plan based on proposed end uses, and prepared cost estimates.

The Master Plan went through several draft phases and a review by SHPO. The final report was issued on July 20, 2018. The report is available here.

In early 2019, the City contracted with Quality Masonry to make repairs to the exterior shell of the building on the track side, as well as sections of the roof. More than 40 windows were also replaced or repaired. The track side of the building was then painted from end to end.

In 2020, windows and painting on the first floor exterior was completed. In addition, original stain glass in the lobby windows was uncovered and found to be mostly in tact. This glass was restored.

Galion Depot, Inc. is a local board formed in August 2015, after discussions from two public forums. It is an incorporated, non-profit entity recognized by the State of Ohio. The organization's purpose is to preserve, restore and rehabilitate the Galion Big Four Depot and to educate the public on local history and the community’s rich railroad and industrial heritage.  There are a total of nine (9) trustees consisting of one representative appointed by each of the following entities: Galion Historical Society, Preserving Galion, and Friends of the Big Four Depot, and two appointments for the City of Galion. An additional four community members were elected by the initial five trustees. Any person, corporation, partnership, organization or institution interested in the purpose of this group may become a member.
Current trustees: Matt Echelberry, President Marty Cecil, Vice President Kaitlyn Griffith, Treasurer Beth Comerford, Secretary
Scott Carpenter
Jim Gerstenslager
Jennifer Kuns

The City of Galion was awarded a $200,000 grant from the Ohio Cultural Facilities Commission in 2003. Funding was put on hold when the city went into fiscal emergency, but in late 2015, the agency indicated a project at the Depot needed to be under contract by June 2016. Grant criteria stipulated that the project must be complete and open to the public at the end of construction, which eliminated a project for the Depot itself.

Galion Depot, Inc. worked with the City to plan a project to construct a community pavilion on the property that could be used for public events, educational programs, live performances, and fund raising events for Depot restoration. Weithman Brothers was awarded the contract and began work in early 2017. Construction was completed in May.

We commonly receive feedback about no restrooms being located at the pavilion. Including restrooms would have been an estimated $50,000, and would have required a plumbing permit. Temporary restrooms will be used until the existing restrooms inside the Depot can be restored. The goal is to have these restrooms in service this year.

Rentals: Please call the Mayor's Office at 419-468-1857 if you are interested in reserving the pavilion. It is $75 for the full day. Maximum capacity is 74 people and there are 10, 8-foot tables and 80 chairs available.
Address:
127 North Washington Street